A Personal Finance Guide-Learn to Manage Your Own Retirement and Investment Accounts!

- December 08, 2017
I’ve decided to start this personal finance blog to empower workers like myself to take control of their finances.  I always felt a bit overwhelmed when it came to managing my money especially retirement savings.  The message that I should be saving a portion of my annual income in a 401k did sink in, however, I did not put much effort into managing my nest egg.  I make a good salary as an engineer but all through my twenties and thirties I’d save just enough to get the company match-typically 4-6% depending on who I was working for…and that was about it.

Whenever I changed jobs, overwhelmed by learning my new role and a mountain of HR forms, I’d sign up for the company 401k.  And then I spent a total of 5 minutes determining where to put the money that would ensure my security for the 30-40 years after retirement.  I usually invested in target date funds per my age (2040/2045).  I never looked to see how my investments were performing (or cost) other than quick glances at annual statements.  And I was slow to move stranded 401k’s from old employers (who often liquidated my shares or put me into high fee active funds after leaving employment-thanks!).  I even committed the cardinal investing sin of cashing out one account to buy a house-at least it wasn't to buy handbags…

Then around September 2016 I decided to rollover an old 401k into an IRA at Fidelity where I have my current 401k.  At first I struggled to decide where to invest so I started doing research and came across the Wall Street Journal’s series on passive versus active investing.  Essentially, it is a rare investor who can beat the market over long periods of time so you’re better off investing in cheap index funds rather than high fee actively managed funds or picking risky individual stocks.  I was floored!  I never paid attention to how much the actively managed mutual funds I was investing in were charging me.  And I’d definitely never studied how the funds had performed against their benchmarks (e.g. the S&P 500).  So I plotted, via Google Finance, my target date fund's performance since I’d started at my employer in October 2013.

Trust me when I realized this I was more than disappointed-I was furious.  Digging deeper into how my fund had performed since inception in 2011 the story is worse!

Then I learned that the fund was charging me .67% in fees ($6.7 for every $1000 invested) annually for the privilege of not making any money (and even losing it in 2015).  When I compared this fee to .035% for a Fidelity S&P 500 index fund (35 cents for every $1000 invested) that was all the push I needed to move my money to passive index funds.  Index funds just seek to replicate the market-not outperform it like my actively managed target date fund.  Index funds have lower fees because they are run by computer algorithms which just replicate the market portfolio e.g. the underlying stocks in the S&P 500, Russell 2000, or Nasdaq.  Actively managed funds are run by teams of highly paid asset managers, whose salaries and expenses (in addition to a brokerage firm profit markup) you are paying through the fund's fees, whose task is to outperform the market.  I decided that if my highly paid fund manager wasn't even matching the market-why shouldn't I just buy the market through index funds and pay lower fees?   So I went on a long journey to educate myself on how to invest passively.

To take a look at how the funds in your portfolio have performed overtime. 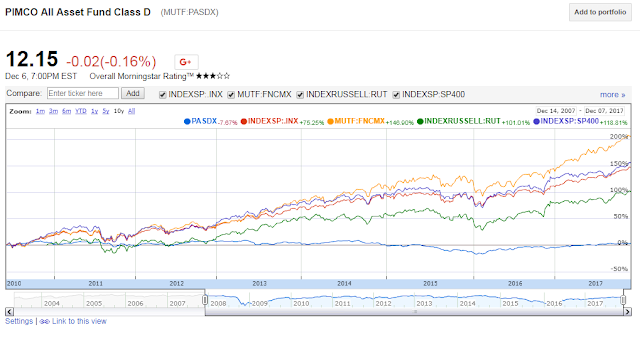 Popular posts from this blog

The Million Dollar 401k – Who Wants to Be a Millionaire? 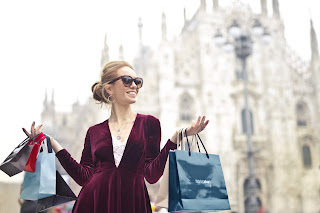 Photo courtesy Pexels.com Every few months the financial press releases an article on the increasing number of 401k millionaires.   “Number of 401k Millionaires reaches all time high”   “41% increase in number of million dollar 401k accounts”.   Th e standard advice is offered on achieving this milestone-401k millionaires stay at the same job for years, are high earners, save enough to get a company match-in fact up to 15% of their earnings, and start saving at an early age.   Easy right? Of course the ~150,000 401k millionaires at Fidelity represent less than 1% of their total number of retirement accounts.   If it’s so easy why is the average American’s retirement savings only $95k? The average salary in the United States is $56,000 before taxes.   Federal taxes drop that number down another 20% (assuming you live in a no state income tax state). After housing-$12,000 rent, transportation $9,000, food $6,000, health care $4,000, and miscellaneous expenses $5-$10,000 there’
Read more 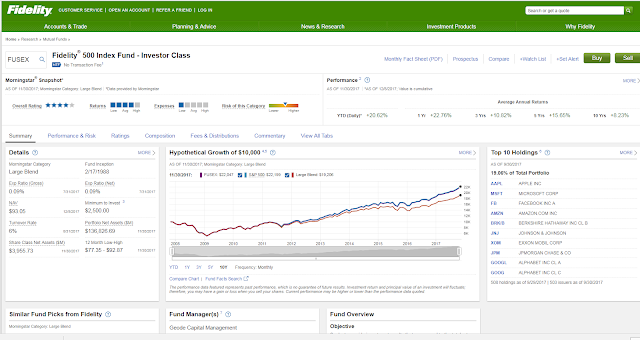 Conducting Research To research Fidelity’s S&P 500 Index Fund (Ticker: FUSEX), or another provider's, look it up on your brokerage's website (see notes on navigating to Fidelity's investment products below). The key item I look for in any index fund are the fees or expense ratio.  FUSEX has an expense ratio of 0.09% meaning that this fund will charge 90 cents per year for every $1000 invested in management fees to own this fund.  Also evaluate how well funds track their underlying index over time referred to as tracking error.  Some providers will report this directly but if yours does not you can head over to Google Finance and plot your fund versus its benchmark overtime.  In the example below, Fidelity’s Russell 2000 Index Fund (Ticker: FSSVX) is plotted against the Russell 2000 Index (Ticker: RUT).  You can see FSSVX tracks its benchmark within reasonable error-there’s a pretty steady delta over time.  Note: over long periods the difference will be
Read more

Investment risk cannot be eliminated. Past performance is not an indicator of future returns. The articles on this website are for informational purposes only. Conduct thorough research before investing and/or seek professional advice.